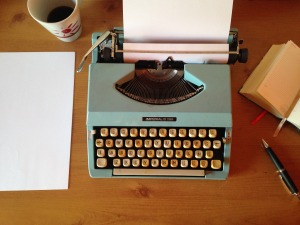 Tonight I started writing the manuscript (again). I hadn’t planned it, and I might not keep any of the words I wrote today, but I feel like I’ve made a lot of progress in just a few hours. I think I may have found out how I want to tell this story – third person perspective, present tense. I’ve been very certain about past tense up until now, but I do think present tense makes it more interesting. What I can safely say is that I haven’t made a decision about this yet, and there will be a lot more testing before I can do that. As usual writing is so much fun, and I’m completely in love with my characters. Going to nail this one day!

…that I haven’t abandoned blogging, though it obviously seems that way. I’m as busy as ever, and in my free time I read a lot of books, and that’s basically what I’m doing right now. I’m also working on the Wavesongs character sheets and it’s so much fun, it really is. I’ve known these characters for five years now and this past month I’ve learnt so many new things about them, about the plot, everything. I love plotting, but it’s also always been my weakness because I’m impatient, I just want to start writing the story, get on with it. This time it’s easier, I guess, because I’ve written this particular story already (with a bunch of differences, but still), and I’m at a point where I really want to explore all the aspects of it, and move slowly. I’m more careful with it this time, I know how easily stories can take a wrong turn and I honestly don’t wish to start over from scratch for a fourth time. Third time’s the charm, and all that.

I know, I’m really bad at updating. It’s really hard to find the time and I haven’t had anything to blog about either, since I haven’t worked on Wavesongs for a long time. But now I’m finally in the process of plotting the story, which has taken a lot of time since I felt the need to write short stories for a while and sort of write freely, without a deadline, without any plans or character limits. It’s been really good for me and I’ve had a lot of fun – I’ll keep writing short stories, of course, but not all the time because I do need to focus on my novel projects.

Wavesongs plotting is mostly difficult and frustrating right now, but it’s getting there, no matter how slowly. I didn’t think I’d need to change that much, but it will be a completely different story – and I’m happy about that. I’ll be able to make my otp happen for real, after all, and that makes me very happy. My hopes are also that I’ve learnt from my mistakes and will write a much better and more exciting story this time. We’ll see, but from the ideas I’ve had already I think it will be a really fun trilogy to write. Much more than before because it will be a lot less angsty.

I can’t make any promises about updating more often but I’ll try to come up with ideas for  the blog as well, in between thinking about those pirates 😉

Finally. I’ve had writer’s block for over a month and the last short story I wrote in 2015 was really bad… but tonight I managed to finish my first story of 2016! Just a short Wavesongs short story, sort of AU and plotless but I don’t care, as long as it’s my favourite characters being lovely and themselves and then there’s lots of dialogue and cute things they’re doing and… yes, writing Wavesongs stories really is the easiest because I know this verse so well, I don’t have to think about what the characters are like, and so it’s extremely useful whenever I get writer’s block and feel like I’ll never ever write again.

Also, I thought I’d count all the stories I wrote last year, which was by far my most productive year ever. In total, I wrote one novel, 26 short stories and 1/4 of another novel, and on top of this I also did a lot of editing. So I felt much better after that (and after writing the new story), and I hope I can keep it up this year as well! Let’s see how that goes 😉

So, it’s a new year and I hope 2016 has been good to you all so far. Personally, I’m just happy about the snow we’re having right now, and try not to think too much about all the serious work-related things ahead. I’ve had a lovely time during the holidays and now I’m looking forward to getting back to my routines, which will probably take a few days.

Oh, and this big, writing-related thing happened (well, it happened in my head). I don’t really know where it came from, but I realised I have to rewrite Wavesongs so that Chris and the Captain actually end up together (which they don’t, in the current version). It just hit me that I’ve been writing a story where I have a very obvious favourite character, and a very obvious OTP, but I’ve made the story go in another direction and that’s just… not good. My reason has been that the Captain is so flawed that Chris shouldn’t get stuck in a relationship with him, because there were certain things the Captain did that were unforgivable and you shouldn’t be with someone who doesn’t respect you. But what if I change him? What if I make a few tweaks and sort of merge his and Dylan’s character’s together, into one, better man who will actually be lovable? I feel a little crazy for even considering this, because it will change the entire story, and what will become of Dylan? etc etc… But I know deep down that I need to do this, and that I should have done it ages ago, because no matter how hard I’ve been fighting it, this trilogy has always been about the Captain. And it just became odder and odder how Chris kept obsessing and sort of caring for him, long after they’d fallen out and he was happy together with Dylan and definitely shouldn’t think of someone else. But he did, and I did, and I very much look forward to playing God and making this story turn out just the way I want.

This also means that Wavesongs will fit much, much better into the romance genre. It probably seems like a weird decision to my beta readers, but knowing what will happen in books two and three, I feel confident that I’m doing the right thing. *gross sobbing at the thought of actually making OTP 100% real* In a strange and slightly masochistic way, I’m also looking forward to rewriting the book completely. I don’t know how many decades it will take for me to finish the entire trilogy but I can’t wait to get to those final chapters of book three!