Well, you can finally find that out, because the last book in the Wavesongs series, Ablaze, is released today. You can buy it on Amazon, Apple, Barnes & Noble and Kobo. If you prefer reading on paper, the paperback will be available shortly.

I’m so excited about this book and about finishing the series, which has been a huge part of my life for many years. I’d like to thank all my readers for taking a chance on my story. I hope you’ll enjoy Ablaze!

The release date for Ablaze, the final book in the Wavesongs series, is only a few weeks away – the book will be out on December 8. I’m so excited about it and I hope all you readers will enjoy it!

If you want to make sure you receive it as soon as it is available, you can pre-order it on Amazon, Apple, Barnes & Noble and Kobo.

If you haven’t read the previous books, now’s your chance because Astray, the first Wavesongs book, is currently on sale for only $0.99. Available on Adlibris, Amazon, Barnes & Noble, Bokus, iBooks, Kobo, Playster and Scribd!

I also have something exciting to show you – Ablaze‘s pretty cover! Here it is: 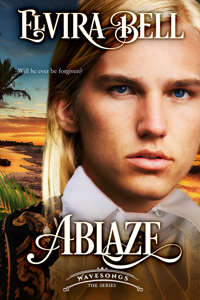 Forlorn is finally being released today, and I’m really excited. This book didn’t take a lot of time from start to finish compared to Astray, but writing a novel is always a lengthy process that takes plenty of effort. The setting in this second part of the series is quite different from the first book, and I truly enjoyed writing it. Perhaps not at all stages (I always find the very first round of editing more or less painful), but I am fond of this book and I had tons of fun creating it.

Astray‘s release is getting closer, and with it comes a lot of emotions. Most of them positive, of course – I’m beyond thrilled about finishing this book and being able to focus on the sequel. But there’s also a bit of anxiety, that I suppose is inevitable when you’re about to share something you created.

As some of you might have noticed, I call myself a m/m fiction writer in my blog header. On my About page, I write that I write m/m fiction but with a touch of romance. This isn’t because I don’t want to be associated with the romance genre – on the contrary. I have so much respect for the genre and for romance writers, and I’m well aware that the genre has its rules. Rules that writers are expected to follow. There are so many writers out there who can write beautiful, heartwarming stories that are excellent examples of romantic fiction.

I’ve never been a feelgood person. I don’t know how many times I’ve tried to write children’s fiction, only to realize after a while that my plots are much too dark and that they’d make kids traumatized for life. I don’t know why, but my favorite characters have always been villains and my storylines tend to have at least a few dark elements.

That said, romance is the core of all my stories. You might have to wait for the happy ending, and things might be quite awful for the MC on the way there, but there will be a happy ending. I adore my main pairings above everything else and I wouldn’t have it any other way.

I don’t know what I want to say with this, really, but the thing is that I just don’t want to disappoint anyone. I know my kind of stories aren’t everyone’s cup of tea, and that’s fine. It’s just frustrating, as a writer, to know that you can’t please everyone.

Basically (and this might be a bit spoiler-y): Astray is the first part of a trilogy. It’s 1/3 of the story. And when I say that my MC’s will get a HEA, I mean it. That might not happen in the first book, though. Just thought I should let you know.

There’s a Goodreads Giveaway up for Entertaining the Sombrevilles – go here for a chance to get a free copy of the book.

It’s less than two weeks now until the release date. I’m currently doing my last read-through, and I’m so happy with how the book has turned out. It’s still surreal to think about it actually being published, though. And a bit scary to think about people reading it.